When we think of spectacular nature, our minds perhaps turn to the dusty savannahs of Africa or the vast wilderness of the Pantanal, where jaguars roam and caiman lurk. We seldom think of Europe, with its formidable autobahns and bustling cities.

But, for Hugo Ferreira, a 27-year old from Portugal, Europe has some hidden gems, wetland gems to be precise, and more people need to know about them. For the past two years, Hugo has been volunteering at France’s largest wetland, the Camargue.

Nestled between France’s cosmopolitan cities of Montpelier and Marseille, the Camargue stretches nearly 150,000 hectares between two gulfs, forming a triangular delta with the Mediterranean Sea at its base. These wetlands are home to 75 species of fish, 15 amphibians, six reptiles, 32 mammals, and 412 birds, with 111 regularly nesting species. And, more than 1,500 of France’s 4,700 flowering plant species are to be found here. The Camargue also supports species like the Greater Flamingo, the Glossy Ibis, Eurasian bittern and more.

27-year-old Hugo from Portugal has been volunteering at France’s largest wetland, the Camargue, for the past 2 years.

Hugo has been volunteering in fieldwork, monitoring and studying the ecology of the wetlands, as well as doing workshops and talks for kids, students and other audiences. He says: “I fulfilled my kid´s dream of doing what I saw every Sunday morning in nature programmes on the TV. I’ve been in a natural reserve studying wild animals like spoonbills, flamingos, ibis, gulls, boars, coypus, marmots, parasites mosquitoes, coleoptera, eels, fish.. I was so happy and motivated that I would just help in every project I could!”

“I fulfilled my kid´s dream of doing what I saw every Sunday morning in nature programmes on the TV.”

But it wasn’t always so. Although Hugo had studied ecology (algae macroinvertebrates communities), after university he found it difficult to find related work in Portugal. He took a job at a hotel in the Algarve, where he gave presentations on local biodiversity. However, he wanted more and felt unfulfilled. “Despite meeting amazing people there, I was quite depressed, feeling that all my hard work in my studies were in vain. It was definitively not the life I imagined for myself and not fulfilling my urge for adventure and discovery.”

Following his passion, he found an opportunity in the framework of the European Solidarity Corps programme, plucked up the courage to move to a different country, learn a new language and started with Wetlands International partner, Tour du Valat, a research institute for the conservation of Mediterranean wetlands.

Work on reviving these wetlands has involved bringing a variety of stakeholders together – birds-watchers, students, bull breeders, horse-owners and fishers to share the space. There are regular talks, activities and workshops for the local community.

Now, in the early stages of a PhD, Hugo continues to introduce people to the wildlife of the wetlands and how to safeguard these gems.

“The Camargue is special to me because there I not only found a new place to call home but also the chance to live the dream I had as kid.”

Through a youth event Hugo met people in the European Commission who invited him to create a network to connect young people around Europe and to inspire them to take action. Part of this is to share his volunteering story and inspire others as to how they can get involved. Along the way at these events, he has picked up the name, “flamingo boy”.

He explains: “During my volunteering, I recorded a video about my experience and took part in a photo competition. I was selected as one of the volunteers of the year and for the best magical moment volunteering for nature. Since the highlight was the flamingos, I started to be internationally known at youth events as the ‘flamingo boy’. The best skill I learned during my project was how to dance and sing like a flamingo. Maybe next time I can show it to you!”

Now, in the early stages of a PhD, studying migration of spoonbills from Camargue, Hugo continues to introduce people to the wildlife of the wetlands, and gives talks on the importance of wetlands and how youth in Europe can get involved to safeguard these gems.

Hugo picked up the name “flamingo boy” after sharing his volunteer stories at international youth events, where he tended to show videos of flamingos. 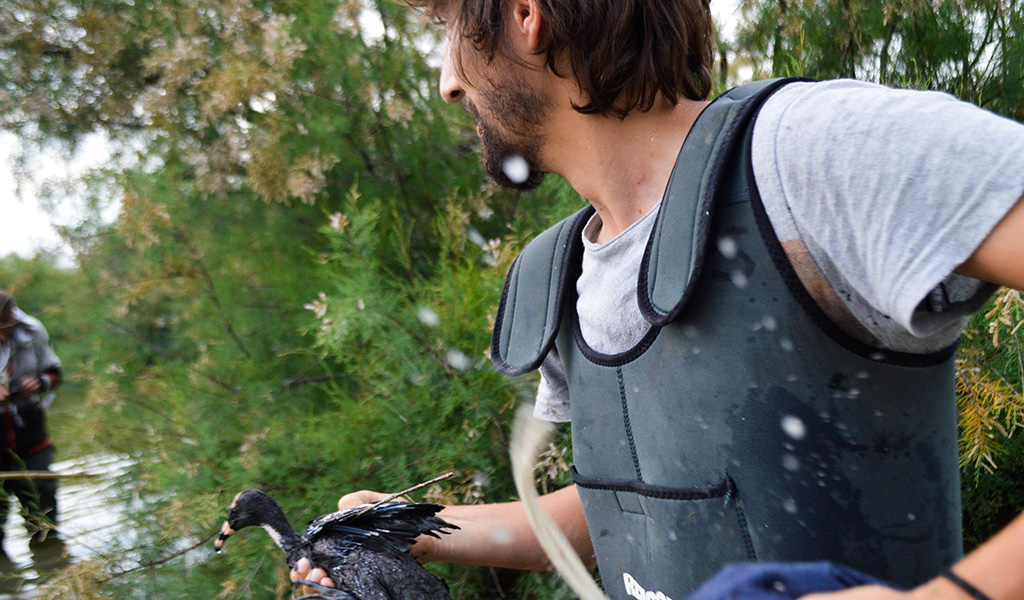